In eight minutes we learn only that he loved Spider-Man as a 5 year-old and that Tobey Maguire gave his blessing for him to take over (though they've never met). He also didn't write an acceptance speech for the upcoming Golden Globes. But that's okay because he's not going to win (see the next bullet point).

Andrew is a little more effusive in this interview with Capital FM where he talks about wearing the Spider-Man suit.

"I shed a tear when I first wore the spandex. I didn't think that the spandex would make me so emotional, but it did."

Christian Bale will be hogging all the gold statues for his totally brilliant performance as a retired boxer/crack addict. Have you seen The Fighter yet?

This coming summer Pixar gets postage stamps celebrating their beloved characters from WALL•E, Cars, Ratatouille, Up and Toy Story. I thought you had to be more aged to receive your own stamps? Perhaps that only applies to flesh and blood characters and not pixellated ones.

Clint Eastwood has cast more stars for his upcoming J Edgar Hoover biopic including, probably, Charlize Theron and Dame Judi Dench. (I almost typed Dame Edna. What's wrong with me? One doesn't suspect Clint would go for Dame Edna even though Hoover was a rumored crossdresser.) There's no word yet on which role Dench would play but the film stars Leonardo DiCaprio as the famously closeted FBI director and Armie Hammer (The Social Network's Winklevoss twins) as his lover and star employee. It's now retitled J. Edgar. 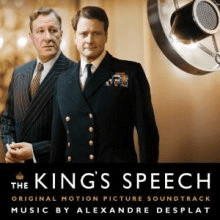 Here's an amusing bit about Oscar hopeful The King's Speech: Is it really just another Karate Kid remake?

Do you ever listen to soundtracks? The Academy has already declared a few major Oscar hopefuls like True Grit and Black Swan ineligible for their Original Score honor and now we know that Toy Story 3 won't be nominated either. The full list of 77 eligible scores is a thinner field than usual which might prepare the way for Oscar to get a little more experimental in what they choose; Could rock god Trent Reznor actually become an Oscar nominee for his thumping Social Network score? Or Perhaps it'll just clear the way for an Alexandre Desplat win? He's a likely nominee for The King's Speech (though his work on The Ghost Writer is even better) so if he can get around Hans Zimmer's big Edith Piaf flavored Inception score, he may be golden. Desplat is the movie's busiest composer now but I recently had a chat with him and he even let me know how he picks which scores go on his Oscar ballot. 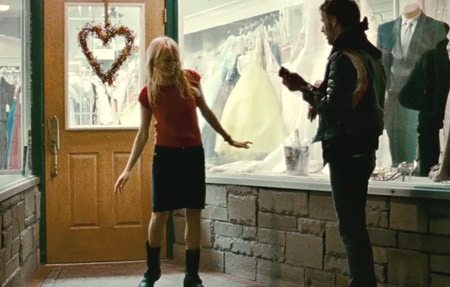 "You Always Hurt the Ones You Love" -Gosling serenades/warns Williams

NOW PLAYING
You have your pick of Oscar hopefuls this holiday weekend. Black Swan (previously discussed), True Grit and The King's Speech have all recently gone wide. If you're on one of the coasts, you must check out Ryan Gosling and Michelle Williams in BLUE VALENTINE now in limited release. The drama has a fully earned reputation for being brutally depressing but there's so much electricity in their duet that it's not remotely a tough sit. The film juxtaposes Ryan and Michelle's initial courtship with their breakup, allowing you an insightful look at all the seeds that will grow into marital weeds. It's vaguely reminiscent of the great stage musical The Last Five Years albeit without all the singing. That said, former boyband hopeful Ryan Gosling does do a mean rendition of "You Always Hurt the Ones You Love" with a ukelele in hand. 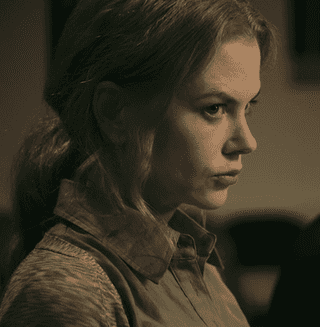 A less depressing option is – surprise! – the grief drama RABBIT HOLE. It's based on the award-winning Broadway play with Nicole Kidman taking over Cynthia Nixon's role for the screen. Though it's a story of a couple who recently lost their only child, it's much more about healing than wallowing in grief. Out director John Cameron Mitchell, having already proven himself a thrilling filmmaker (Hedwig and the Angry Inch, Shortbus), does an artistic about face and let's the actors shine while he works invisibly this time. Kidman gives her best performance since Birth, which, come to think of it, was also suffused with the mysteries of grief. She has a real gift for it, never playing just one note.

Both films will be expanding further in January. How widely they do so will probably depend on Oscar nominations.

If Andrew Garfield gets Oscar nominated for his sympathetic turn as Eduardo Saverin in The Social Network, you know he'll be bombarded by Spider-Man questions on every red carpet. He'll be forced into giving a million superhumanly vague answers to protect blockbuster secrets. He's already quite an expert at being charming and articulate without actually saying anything, like in this new BBC interview. 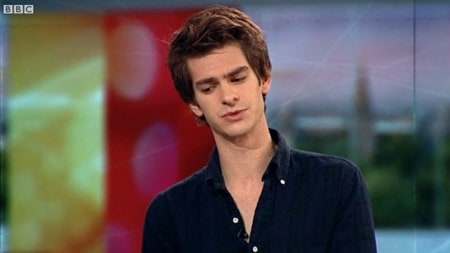 Previous Post: « Watch: Rocker Patti Smith Reflects on Winning Memoir ‘Just Kids’, Life with Robert Mappethorpe
Next Post: Cenk Uygur Asks GOProud’s Christopher Barron Why He’s a Republican: ‘They Don’t Even Like Who You Are’ »