Yesterday, Palm Springs Police Chief David Dominguez publicly apologized for homophobic remarks he made during a sex sting operation that targeted gay men in that city. 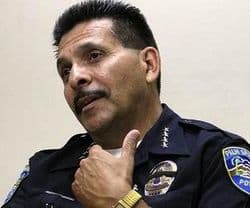 Valley News reports on exactly what Dominguez was caught saying: "What a bunch of filthy mother (expletive). You guys should get paid extra for this."

According to court documents, Dominguez used the phrase "filthy motherf**kers” while another officer involved in the sting was overheard using the slur "c**ksuckers."

It took Dominguez a few months (and a couple of denials) but he has now apologized: "An inappropriate comment made by me did not display the utmost professional conduct expected from the chief of police and I sincerely apologize to the community at large."

The apology came only after City Manager David Ready released a memo to the Palm Springs City Council that criticizes the way in which the stings were conducted: “Portions of the operation were not conducted according to the professional standards that are expected of our Police Department. As a result, appropriate disciplinary and correction action has already been taken.”

Valley News provides more information about the findings: "In the city's report, Ready said police should have reached out to hoteliers, businesses and residents to warn them about the sting operation. He suggested the sting could have been done with surveillance instead of undercover decoys."

You may recall that the sting operation caused quite an stir among the city's gay community over the summer. The undercover operation targeted gay men involved in public sex and were charged under a harsh and unusual section of the Penal Code that would require them to register as sex offenders for life.