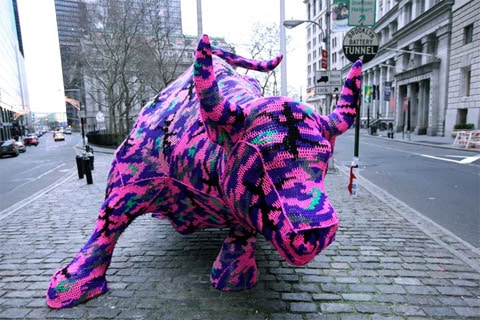 Before the blizzard hit this week, NYC street artist Crocheted Olek hit Wall Street with her most recent stealth art piece. I've posted her work before (see here) but it seems to be getting a bit more monumental.

Olek (whose real name is Agata Olek) crocheted a coat around the famous Wall Street bull, which lasted for about two hours, she says.

Olek writes: "It was truly a year of guerrilla actions that opened a new path in my crocheted investigations. I started it with a bike and ended up with the Charging Bull as a Christmas gift to NYC and a tribute to the sculptor of the bull, Arturo di Modica, who in another guerrilla act, placed the bull on Wall Street in Christmas of 1987 as a symbol of the 'strength and power of the American people' following the 1987 Stock Market crash." 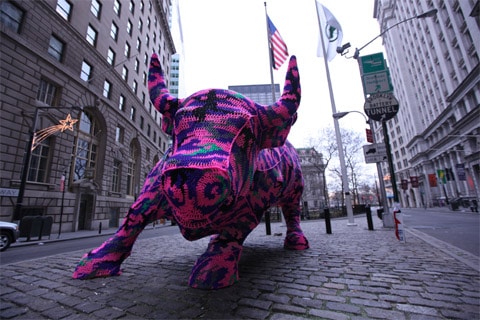 (images via animal and agata olek)

Previous Post: « Chris Colfer and Darren Criss: A Valentine’s Kiss?
Next Post: Watch: The Bizarre World of the Bisexual »