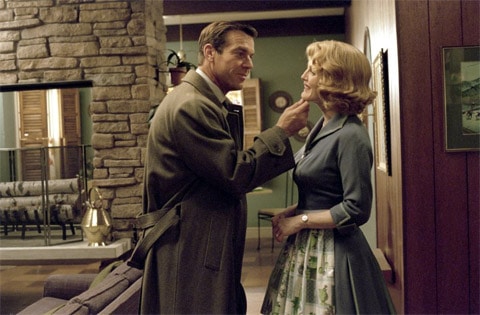 Far From Heaven, "the 2002 (Todd Haynes) film starring Julianne Moore as a 1950s housewife coping with a closeted gay husband (Dennis Quaid) and her romantic feelings toward a black gardener (Dennis Haysbert)," is being developed into a musical by the composer and lyricist behind Broadway's Grey Gardens, the NYT reports:

"The composer Scott Frankel and the lyricist Michael Korie, who most recently collaborated on the 2009 musical 'Happiness' at Lincoln Center Theater, will be joined on 'Far from Heaven' by the playwright Richard Greenberg (the Tony-winning “Take Me Out”), who will write the book, Playwrights Horizons announced on Friday. There is no deadline for the commission, and the show is unlikely to arrive at the Off Broadway theater before 2012 at the earliest, a spokesman for the theater said…The regional theater partner for 'Far from Heaven,' which will produce it first before the move to Playwrights Horizons, will be announced later, along with a director and a production timetable."