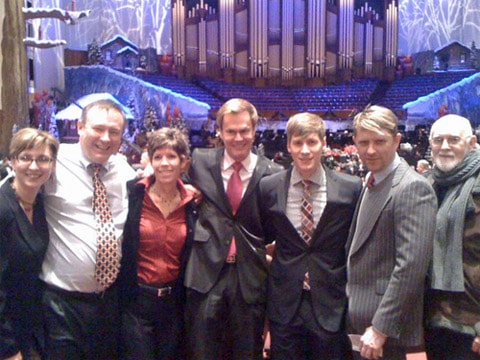 ABC4 in Salt Lake City is buzzing about the gay activists who were invited to and attended the LDS Church's Christmas concert in Salt Lake City. Those attending included Oscar-winning screenwriter Dustin Lance Black and WordPerfect founder and philanthropist Bruce Bastian, as well as a group of local Utah gay activists.

"In a lengthy phone conversation, Black told ABC 4 that it was 'an honor' to see the concert and an, 'extraordinary act of goodwill.' He also told us a conversation has been started between the gay community and the Church and that, 'both sides are trying to find common ground.' ABC 4 News is also being told that the Church has met previously with both Black and Bastian, one of the founders of WordPerfect. This, reportedly, to get more information about gay issues."

The LDS Church issued a statement regarding their attendance: "The Church frequently extends invitations to social events to community leaders representing a variety of views, beliefs and organizations."

Watch ABC4's report, AFTER THE JUMP…