You know, I am just overwhelmed.  This is a very good day.  (Applause.)  And I want to thank all of you, especially the people on this stage, but each and every one of you who have been working so hard on this, members of my staff who worked so hard on this.  I couldn’t be prouder.

Sixty-six years ago, in the dense, snow-covered forests of Western Europe, Allied Forces were beating back a massive assault in what would become known as the Battle of the Bulge.  And in the final days of fighting, a regiment in the 80th Division of Patton’s Third Army came under fire.  The men were traveling along a narrow trail.  They were exposed and they were vulnerable.  Hundreds of soldiers were cut down by the enemy.

And during the firefight, a private named Lloyd Corwin tumbled 40 feet down the deep side of a ravine.  And dazed and trapped, he was as good as dead.  But one soldier, a friend, turned back.  And with shells landing around him, amid smoke and chaos and the screams of wounded men, this soldier, this friend, scaled down the icy slope, risking his own life to bring Private Corwin to safer ground.

For the rest of his years, Lloyd credited this soldier, this friend, named Andy Lee, with saving his life, knowing he would never have made it out alone.  It was a full four decades after the war, when the two friends reunited in their golden years, that Lloyd learned that the man who saved his life, his friend Andy, was gay.  He had no idea.  And he didn’t much care.  Lloyd knew what mattered.  He knew what had kept him alive; what made it possible for him to come home and start a family and live the rest of his life.  It was his friend.

And Lloyd’s son is with us today.  And he knew that valor and sacrifice are no more limited by sexual orientation than they are by race or by gender or by religion or by creed; that what made it possible for him to survive the battlefields of Europe is the reason that we are here today.   (Applause.)  That's the reason we are here today.  (Applause.)

So this morning, I am proud to sign a law that will bring an end to “Don’t Ask, Don’t Tell.”  (Applause.)  It is a law — this law I’m about to sign will strengthen our national security and uphold the ideals that our fighting men and women risk their lives to defend.

No longer will our country be denied the service of thousands of patriotic Americans who were forced to leave the military -– regardless of their skills, no matter their bravery or their zeal, no matter their years of exemplary performance -– because they happen to be gay.  No longer will tens of thousands of Americans in uniform be asked to live a lie, or look over their shoulder, in order to serve the country that they love.  (Applause.)

As Admiral Mike Mullen has said, “Our people sacrifice a lot for their country, including their lives.  None of them should have to sacrifice their integrity as well.”  (Applause.)

Now, many fought long and hard to reach this day.  I want to thank the Democrats and Republicans who put conviction ahead of politics to get this done together.  (Applause.  I want to recognize Nancy Pelosi — (applause) — Steny Hoyer –  (applause) — and Harry Reid.  (Applause.)

Today we’re marking an historic milestone, but also the culmination of two of the most productive years in the history of Congress, in no small part because of their leadership.  And so we are very grateful to them.  (Applause.)

I also want to commend our military leadership.  Ending “Don’t Ask, Don’t Tell” was a topic in my first meeting with Secretary Gates, Admiral Mullen, and the Joint Chiefs.  (Applause.)  We talked about how to end this policy.  We talked about how success in both passing and implementing this change depended on working closely with the Pentagon.  And that’s what we did.

And two years later, I’m confident that history will remember well the courage and the vision of Secretary Gates — (applause) — of Admiral Mike Mullen, who spoke from the heart and said what he believed was right — (applause) — of General James Cartwright, the Vice Chairman of the Joint Chiefs; and Deputy Secretary William Lynn, who is here.  (Applause.)  Also, the authors of the Pentagon’s review, Jeh Johnson and General Carter Ham, who did outstanding and meticulous work –  (applause) — and all those who laid the groundwork for this transition.

And finally, I want to express my gratitude to the men and women in this room who have worn the uniform of the United States Armed Services.  (Applause.)  I want to thank all the patriots who are here today, all of them who were forced to hang up their uniforms as a result of “Don’t Ask, Don’t Tell” — but who never stopped fighting for this country, and who rallied and who marched and fought for change.  I want to thank everyone here who stood with them in that fight.

Because of these efforts, in the coming days we will begin the process laid out by this law.  Now, the old policy remains in effect until Secretary Gates, Admiral Mullen and I certify the military’s readiness to implement the repeal.  And it’s especially important for service members to remember that.  But I have spoken to every one of the service chiefs and they are all committed to implementing this change swiftly and efficiently.  We are not going to be dragging our feet to get this done.  (Applause.)

Now, with any change, there’s some apprehension.  That’s natural.  But as Commander-in-Chief, I am certain that we can effect this transition in a way that only strengthens our military readiness; that people will look back on this moment and wonder why it was ever a source of controversy in the first place.

I have every confidence in the professionalism and patriotism of our service members.  Just as they have adapted and grown stronger with each of the other changes, I know they will do so again.  I know that Secretary Gates, Admiral Mullen, as well as the vast majority of service members themselves, share this view.  And they share it based on their own experiences, including the experience of serving with dedicated, duty-bound service members who were also gay.

As one special operations warfighter said during the Pentagon’s review — this was one of my favorites — it echoes the experience of Lloyd Corwin decades earlier:  “We have a gay guy in the unit.  He’s big, he’s mean, he kills lots of bad guys.”  (Laughter.)  “No one cared that he was gay.”  (Laughter.) And I think that sums up perfectly the situation.  (Applause.)

Finally, I want to speak directly to the gay men and women currently serving in our military.  For a long time your service has demanded a particular kind of sacrifice.  You’ve been asked to carry the added burden of secrecy and isolation.  And all the while, you’ve put your lives on the line for the freedoms and privileges of citizenship that are not fully granted to you.

You’re not the first to have carried this burden, for while today marks the end of a particular struggle that has lasted almost two decades, this is a moment more than two centuries in the making.

There will never be a full accounting of the heroism demonstrated by gay Americans in service to this country; their service has been obscured in history.  It’s been lost to prejudices that have waned in our own lifetimes.  But at every turn, every crossroads in our past, we know gay Americans fought just as hard, gave just as much to protect this nation and the ideals for which it stands.

There can be little doubt there were gay soldiers who fought for American independence, who consecrated the ground at Gettysburg, who manned the trenches along the Western Front, who stormed the beaches of Iwo Jima.  Their names are etched into the walls of our memorials.  Their headstones dot the grounds at Arlington.

And so, as the first generation to serve openly in our Armed Forces, you will stand for all those who came before you, and you will serve as role models to all who come after.  And I know that you will fulfill this responsibility with integrity and honor, just as you have every other mission with which you’ve been charged.

And you need to look no further than the servicemen and women in this room — distinguished officers like former Navy Commander Zoe Dunning.  (Applause.)  Marines like Eric Alva, one of the first Americans to be injured in Iraq.  (Applause.)  Leaders like Captain Jonathan Hopkins, who led a platoon into northern Iraq during the initial invasion, quelling an ethnic riot, earning a Bronze Star with valor.  (Applause.)  He was discharged, only to receive emails and letters from his soldiers saying they had known he was gay all along — (laughter) — and thought that he was the best commander they ever had.  (Applause.)

There are a lot of stories like these — stories that only underscore the importance of enlisting the service of all who are willing to fight for this country.  That’s why I hope those soldiers, sailors, airmen, Marines and Coast Guardsmen who have been discharged under this discriminatory policy will seek to reenlist once the repeal is implemented.  (Applause.)

That is why I say to all Americans, gay or straight, who want nothing more than to defend this country in uniform:  Your country needs you, your country wants you, and we will be honored to welcome you into the ranks of the finest military the world has ever known.  (Applause.)

Some of you remembered I visited Afghanistan just a few weeks ago.  And while I was walking along the rope line — it was a big crowd, about 3,000 — a young woman in uniform was shaking my hand and other people were grabbing and taking pictures.  And she pulled me into a hug and she whispered in my ear, “Get ‘Don't Ask, Don't Tell’ done.”  (Laughter and applause.)  And I said to her, “I promise you I will.”  (Applause.)

THE PRESIDENT:  Thank you!

(The bill is signed.)

THE PRESIDENT:  This is done.  (Applause.) 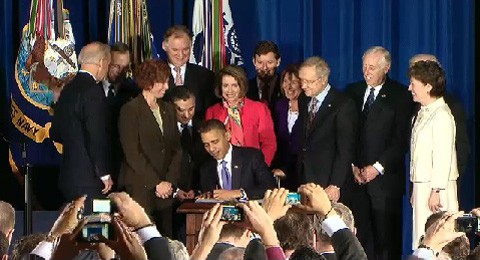 It is done. President Obama has signed the "DADT" repeal act of 2010 into law.

Casting the repeal in terms of past civil rights struggles, Obama said he was proud to sign a law that "will strengthen our national security and uphold the ideals that our fighting men and women risk their lives to defend."

He added: "No longer will tens of thousands of Americans in uniform be asked to live a lie."

The signing does not immediately implement the repeal but instead begins the process of ending the ban on gays serving openly in the military.

The law will not actually change until the Pentagon certifies to Congress that the military has met several conditions, including education and training programs for the troops.

"In the coming days, we will begin the process laid out in the law" to implement the repeal, Obama said. Meanwhile, he cautioned, "the old policy remains in place." But he pledged that all the service chiefs are "committed to implementing this change swiftly and efficiently," and he vowed, "We are not going to be dragging our feet to get this done."

Since some of you have been asking, yes, I was sent an invitation to attend the signing as a guest, but because of holiday travel plans I have this afternoon I was not able to make the trip to D.C. I do find it encouraging that the White House reached out to bloggers and activists to attend this historic moment.

Video and transcript, AFTER THE JUMP…