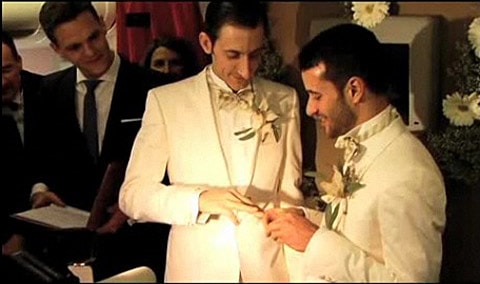 I recently posted about the in-flight double gay wedding held by Scandinavian Airlines (SAS). The weddings, held in early December, were part of a competition, and Passport Magazine was on board to film it.

"During the flight from Stockholm’s Arlanda Airport to Newark Airport German gay couple, Aleksander Mijatovic and Shantu Bhattacharjee and Polish lesbians, Ewa Tomaszewicz and Gosia Rawinska, tied the knot. The wedding ceremony itself took place whilst the plane was still in Swedish airspace, and was performed by Christofer Fjellner, a member of the European Parliament. SAS offered the civil partnerships as a prize in a competition won by Mijatovic and Bhattacharjee garnered over 80,000 votes on various social media platforms. The couples will spend three days in New York before flying onto Los Angeles to finish their honeymoons."

Check out the heartwarming moments at 35,000 feet, AFTER THE JUMP…

Note: the video was shot and edited by our sometime correspondent Josh Koll.