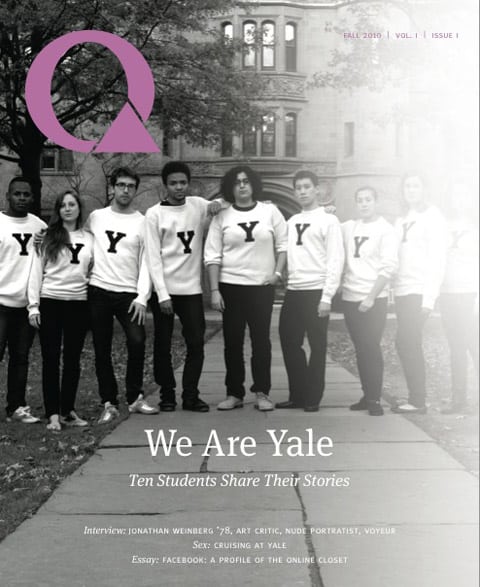 Its editor, Jake Conway, and publisher, Alice Song, both class of '11, write:

"Its mission is to serve as a guide to students on campus through the celebration of the queer experience. The feature of the first issue, 'We Are Yale,' is a compilation of personal essays from ten students representing the diversity and vibrancy of queer life at Yale. Other articles include: 'Cruising or: How I learned to stop worrying and love the cock,' an exposé of cruising culture at Yale; 'The Lowdown: Lesbian Sex,' a short essay demystifying lesbian sex with accompanying photo shoot; 'Undressing Jonathan Weinberg,' an interview with nude portraitist and Yale art critic Jonathan Weinberg ’78; and 'Missing Pages: The Diary of Albert Dodd, 1838,' a historical essay discussing bed sharing between Yale men in the nineteenth century."

The magazine is to be published once a semester, in a print run of 2,500 copies for distribution to the entire campus.

Conway says the magazine will have an online component next semester.