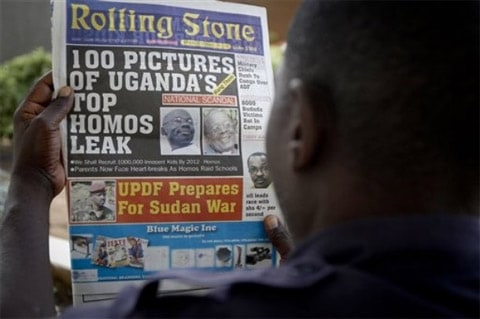 David Kato, a Human Rights Activist, who according to Human Rights Watch "had dedicated his life to fighting for the rights of lesbians, gays, bisexual, and transgender persons (LGBT) in Uganda" was beaten to death in his home yesterday. 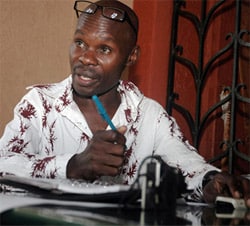 Witnesses told police that a man entered Kato's home in Mukono at around 1 p.m. on January 26, 2011, hit him twice in the head and departed in a vehicle. Kato died on his way to Kawolo hospital. Police told Kato's lawyer that they had the registration number of the vehicle and were looking for it.

Kato was the advocacy officer for the organization Sexual Minorities Uganda. He had been a leading voice in the fight against the Anti-Homosexuality Bill, which has been before Uganda's parliament since October 15, 2009.

You may recall that back in October, the Ugandan tabloid Rolling Stone published a list of '100 Top Homos' with the directions to "hang them" written on the cover.

Kato's face appeared on the cover, and inside, and was named by the tabloid.

"He used to say that he was the first 'out' gay Ugandan," blogger GayUganda posted after he heard the news of his murder.

A primary school teacher, he became a prominent campaigner in recent years, especially taking on the Anti-Homosexuality Bill.

"David was always proactive and also very authoritative. He seemed to want to be a leader in every way," close friend Poline Kimani, from the Gay and Lesbian Coalition of Kenya, told the BBC.

In related news, in yesterday's round-up I posted the story of Brenda Namigadde, a lesbian Ugandan in the UK who is being threatened with deportation despite the hideous situation in Uganda. David Bahati, the author of the "kill the gays" bill, has taken an interest in her 'redemption'. Please sign a petition for her safety here.

Statement from Sexual Minorities Uganda and Amnesty International, AFTER THE JUMP…

Sexual Minorities Uganda (SMUG) and the entire Ugandan Lesbian, Gay, Bisexual, Transgender, and Intersex Community stands together to condemn the killing of David Kato and call for the Ugandan Government, Civil Society, and Local Communities to protect sexual minorities across Uganda.

David has been receiving death threats since his face was put on the front page of Rolling Stone Magazine, which called for his death and the death of all homosexuals. David’s death comes directly after the Supreme Court of Uganda ruled that people must stop inciting violence against homosexuals and must respect the right to privacy and human dignity.

Sexual Minorities Uganda and the Ugandan Lesbian, Gay, Bisexual, Transgender, and Intersex Community call on the Police and the Government of Uganda to seriously investigate the circumstances surrounding David’s death. We also call on religious leaders, political leaders and media houses to stop demonizing sexual minorities in Uganda since doing so creates a climate of violence against gay persons. Val Kalende, the Chair of the Board at Freedom and Roam Uganda stated that “David’s death is a result of the hatred planted in Uganda by U.S Evangelicals in 2009. The Ugandan Government and the so-called U.S Evangelicals must take responsibility for David’s blood!”

David’s life was cut short in a brutal manner. David will be deeply missed by his family and friends, his students, and Human Rights organizations throughout Uganda and around the world. Speaking about what the death of David means in the struggle for equality, Frank Mugisha, the Executive Director of Sexual Minorities Uganda said, “No form of intimidation will stop our cause. The death of David will only be honored when the struggle for justice and equality is won. David is gone and many of us will follow, but the struggle will be won. David wanted to see a Uganda where all people will be treated equally despite their sexual orientation.”

Burial arrangements are underway for Friday 28, 2011 at 2PM at his ancestral home in Namataba, Mukono District.

"Amnesty International is appalled by the shocking murder of gay rights activist David Kato yesterday. The Ugandan government must immediately ensure a credible and impartial investigation into his murder.

“It is deeply worrying that the Ugandan government has been so conspicuously silent about discriminatory rhetoric against LGBTI people in Uganda. Now more than ever is the time for the authorities to reassure Ugandans that it will protect them against threats and violence regardless of their real or perceived sexual orientation or gender identity.

"Any persons suspected of involvement in the murder must be brought to justice in a fair trial which complies with international standards."