France's Constitutional Court, a panel of eight judges, six men and two women, ruled on Friday that the nation's law prohibiting same-sex marriage does not violate the Constiution and directed the issue to parliament, which it said could create new laws regarding same-sex unions. 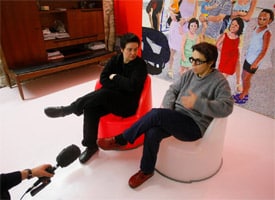 Corinne Cestino and Sophie Hasslauer, who have lived together for 15 years and have four children, had challenged the constitutionality of France's law banning the gay marriage.

In its decision, the Council noted that lawmakers had agreed that the "difference in situations of same-sex couples and couples made up of a man and a woman can justify a difference in treatment concerning family rights."

"It is not up to the Constitutional Council to substitute its appreciation for that of lawmakers," the body said.

It noted that its job is to simply rule on whether a measure abides by the rights and freedoms guaranteed by the French Constitution. In this case, it ruled that the articles in question are, indeed, "in conformity with the constitution."

Cestino and Hasslauer have sought the right to wed.

An opinion poll suggests most French people are in favour.

The TNS Sofres survey of 950 people suggests that 58% of French people approve while 35% oppose gay marriage.

The idea that the court should rule at all on gay marriage was condemned by the leader of France's far-right National Front, Marine Le Pen.

Hasslauer and Cestino, entered into a civil union known as the Civil Solidarity Pact (PACS) in 2000, which offer tax and financial advantages to same-sex couples but not inheritance rights, or hospital rights, and offers few benefits to children of same-sex couples.