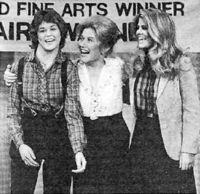 She's coming out, in a memoir. Jezebel reports:

"[Geri] Jewell made history as the first person with a disability to appear in a recurring role on prime-time TV with her part as Blair's cousin on The Facts of Life. Her memoir, out April 1, 2011, will cover her rise to fame, her struggles with cerebral palsy, the discrimination she experienced in Hollywood because of it, as well as her downward spiral into tax problems, having her money embezzled by her manager, a broken marriage and battling addiction. Additionally, the book will mark Jewell's official coming out regarding her sexuality."