GOP Iowa Governor-Elect Terry Branstad tells the Cedar Rapids Gazette that the unanimous 2009 decision by the state Supreme Court which legalized same-sex marriage is not a reason to initiate impeachment proceedings. 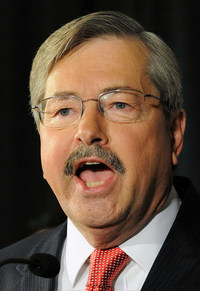 Said Branstad: "I don’t think that impeachment is the appropriate remedy."

Branstad said that an "appropriate" remedy would be to vote them out when they are up for retention.

Three of the seven judges were unseated in November following a successful campaign, driven by religious right-wing groups and legislative conservatives. Since then, those same groups, along with GOP lawmakers, have been plotting ways to remove the remaining four judges, including ridiculous calls for them to resign.

The Gazette reports (via tpm):

In a wide-ranging interview, Branstad said he disagreed with the court’s marriage ruling but he also disagrees with a band of House Republicans who have indicated they are drafting articles of impeachment against Justices Brent Appel, Mark Cady, Daryl Hecht and David Wiggins. Three other members of court – Chief Justice Marsha Ternus and Justices David Baker and Michael Streit — ended their terms Dec. 31 after they lost their retention votes in the Nov. 2 general election.

The incoming governor said he believes the unanimous court “over-reached” when the justices struck down as unconstitutional the Defense of Marriage Act he signed in 1998 that defined marriage in Iowa as only between one man and one woman. The 7-0 ruling in April 2009 had the effect of legalizing civil marriages between couples of the same gender – a change that critics argue was legislating from the bench and over-stepping the justices’ constitutional authority that constituted malfeasance in executing their duties.

“I think if you look and read the Constitution, which I have, I think it’s pretty obvious. The Constitution says what the grounds for impeachment are. My reading is it’s not there,” he said. “There’s a difference between malfeasance and over-reaching, I think. I really think that if people look at the Constitution, I think the remedy is that when they come up for retention that people have a chance to vote them out. I think that’s the appropriate remedy. I don’t think that impeachment is the appropriate remedy.”

Branstad has been under pressure to weigh in on the issue since his election in November.

Branstad's statement comes as conservative Bob Vander Plaats has announced a 99 County tour of Iowa in a renewed effort to oust the remaining four justices.

Check out the promos (via Jeremy), AFTER THE JUMP….