Perhaps you have POIS: 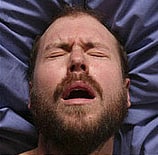 "Some poor men are apparently allergic to their own semen, developing a mysterious flu-like illness after they have an ejaculation, Dutch researchers reported Monday. The condition, known as post-orgasmic illness syndrome or POIS, has been documented since 2002. Symptoms include feverishness, runny nose, extreme fatigue and burning eyes, which can last for up to a week. Some physicians had suggested that the disorder was psychosomatic, but Marcel Waldinger, a professor of sexual psychopharmacology at Utrecht University in the Netherlands, and his colleagues demonstrated in two papers in the Journal of Sexual Medicine that the syndrome was allergic in nature and that it might be possible to desensitize men to the problem."

According to the researchers, "Waldinger and his colleagues studied 45 men with POIS. Thirty-three of the men agreed to undergo a standard skin-prick allergy test using a diluted form of their own semen; 29 of those 33, or 88%, showed a positive allergic reaction, indicating an autoimmune response."