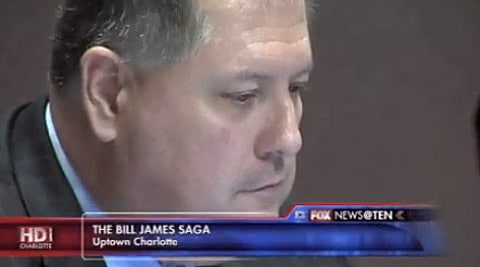 A meeting of the Mecklenburg, NC County Commission became at times heated last night as commissioners and private citizens debated remarks made by its commissioner Bill James in late December, in an email to his colleagues.

Wrote James: “Homosexuals are sexual predators. Allowing homosexuals to serve in the US military with the endorsement of the Mecklenburg County Commission ignores a host of serious problems related to maintaining US military readiness and effectiveness not the least of which is the current Democrat plan to allow homosexuals (male and female) to share showers with those they are attracted to.”

It wasn't the first time that James had disparaged gays. Last year he publicly referred to a fellow commissioner's deceased son (of AIDS) as a "homo" and has said that Black Americans live in a "moral sewer".

Ultimately, the Commission adopted a resolution, that reads:

"The Mecklenburg Board of County Commissioners affirms, proclaims and declares it's public support for community values that embrace and promote equality, diversity, tolerance and inclusion and stands united in firm opposition to inflammatory speech that may cause bullying, intimidation, harassment, persecution or discriminatory treatment of any individual because of their race, color, sex, religion or creed, national origin, ancestry, age, sexual orientation or disability."

James was not censured, or disciplined for his remarks. He did receive some strong criticism from the GOP Commissioner Karen Bentley, who said  James' comments were "beyond reproach" and "out of line with my Christian principles." Many thought he should be forced to step down.

Pam Spaulding writes: "James, as usual, blew off the criticism (and probably enjoyed the attention). He was incredibly rude, not bothering to look up from his terminal to make eye contact with those addressing him."

Watch FOX Charlotte inside the meeting, AFTER THE JUMP…