Though it's still too early for any of the following presidential candidates to announce their run for the presidency, a straw poll of members of the New Hampshire Republican State Committee was held yesterday and Mitt Romney was deemed the clear winner. The top 10 are as follows: 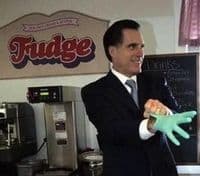 As Talking Points Memo reports, "the straw poll was conducted in Derry, NH and was sponsored by ABC News and WMUR-TV." For a complete list (Mike Huckabee finished 12 out of 25), click to WMUR's website.

If you think it's too early to make an accurate predict, you might be right. Dante Scala, a political science professor at the University of New Hampshire, tells the Boston Herald: “It’s an initial taking of the temperature of the activists in New Hampshire, but I would caution reading too much into it. I’m sure the situation is very fluid right now even among activists. There are going to be a lot of twists and turns between this January and next.”

Also on Saturday, the New Hampshire GOP selected a 'tea party' activist as its leader.