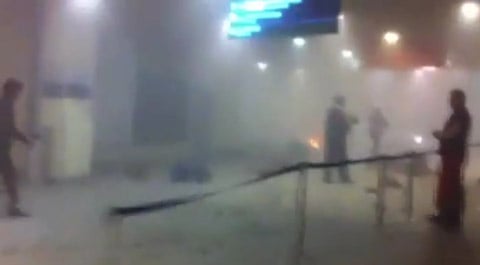 UPDATE: Here's video of the airport shortly after the explosion – warning, extremely grim.

Reports of at least 31 dead and perhaps hundreds injured are coming out of Moscow following an explosion at the international arrivals hall at Domodedovo airport.

The Guardian has a live updates page here….

BBC: "Russia's chief investigator said the explosion was the work of terrorists, and President Dmitry Medvedev said the attackers would be tracked down. The airport is 40km (25 miles) south-east of the city centre. It is popular with foreign workers and tourists. In the aftermath of the blasts, Mr Medvedev ordered increased security across Russia's capital and at other airports, and called an emergency meeting with top officials."

Watch an initial report from Russia Today, AFTER THE JUMP…