Three men are facing hate crime chrges in the UK for distributing anti-gay leaflets outside a mosque in Derby, UK and for placing the leaflets in private mailboxes in July 2010: 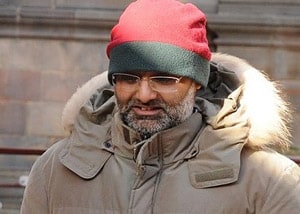 Ihjaz Alie, 41, Mehboob Hussain, 44, and Umer Javed, 37 (pictured), were charged on Thursday night and appeared at Derby Magistrates' Court on Friday to face charges of distributing threatening written material to stir up hatred on the grounds of sexual orientation after handing out leaflets outside a mosque.

Another two men, Razwan Javed, 30, and Kabir Ahmed, 27, were charged in December over accusations they also handed out the leaflet called The Death Penalty? outside a mosque in Derby, the Crown Prosecution Service (CPS) said.

The leaflet is understood to have called for homosexuals to be executed.

According to the CPS lawyer: "This is the first ever prosecution for this offence and it is the result of close working between the Crown Prosecution Service and Derbyshire Police."