At a speaking event at the University of Pennsylvania last night, Newt Gingrich was confronted about his affair and his moral hypocrisy by a student Democratic leader, Politico reports: 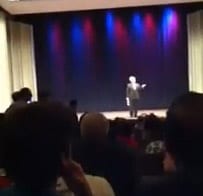 Said Isabel Friedman, president of the Penn Democrats, to Gingrich:

"You adamantly oppose gay rights… but you've also been married three times and admitted to having an affair with your current wife while you were still married to your second," "As a successful politician who's considering running for president, who would set the bar for moral conduct and be the voice of the American people, how do you reconcile this hypocritical interpretation of the religious values that you so vigorously defend?"

Snapped Gingrich: "I'll bet almost everybody here can gather the thrust of your question…I appreciate the delicacy and generosity in the way it was framed. … I hope you feel better about yourself."

Watch a partial video of the exchange, AFTER THE JUMP…

If anybody can point to better video, please do.

Previous Post: « Justice Dept. to Continue Defending ‘DADT’ in Court This Week
Next Post: What Would You Do? Dad Comes Out to His Unaccepting Son in Public »