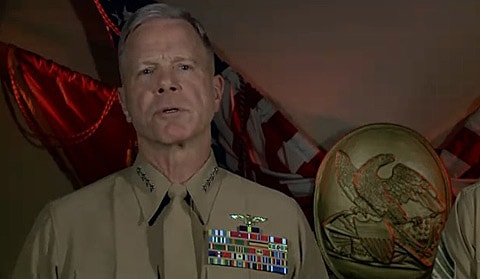 Remember how Marine Commandant James Amos, formerly one of the top proponents of the ban on gays in the military, went kicking and screaming into 'DADT' repeal, warning that troops "distracted" by serving with gay servicemembers could lose limbs in combat?

Amos has really changed his tune:

"It would be naive to think that somewhere down the road there's not going to be issues," Amos told reporters. "I think there probably will be in probably all the services, but I don't think it's going to be of any magnitude that's going to cause much more than a blip. So I'm very optimistic."

Does Amos think the military will lose troops because the ban on gays is lifted?

"I haven't had any indication yet at all, not at all."