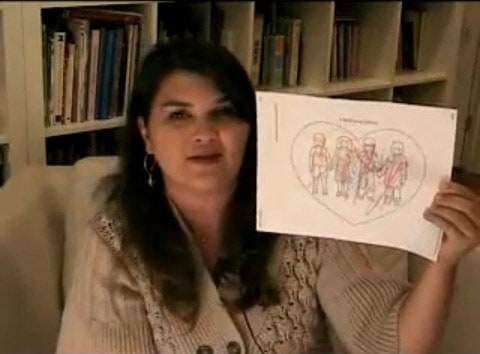 Melanie, a married Mormon mother of five, a loyal member of the Church of Latter Day Saints, and a self-described "disciple of Christ", made the following video in 2008 in reaction to the Mormon church's campaign to pass Proposition 8 and remove marriage rights from gay people.

After threats from church officials, she took it down, but this week reposted it.

I did not discuss the video with my local leaders before making it public, but they were directed to it by church headquarters. At the end of some very heart felt discussions, my speaking out with this video threatened my temple recommend and my calling, and I ultimately chose to take it down to protect my standing in the church.

I have lived to regret the decision. And so today, in honor of the Valentine legend and in support of the love that drives so many of us to share our lives with each other, I stand up once more in favor of marriage, all marriage, with my Prop 8 video.

Watch Melanie's video which demonstrates what it is like to be Christ-like, AFTER THE JUMP…

Previous Post: « President Obama’s Budget and the Coercive Power of the State
Next Post: Watch: Björn Ulvaeus Thanks ABBA’s Gay Fans for Years of Support »