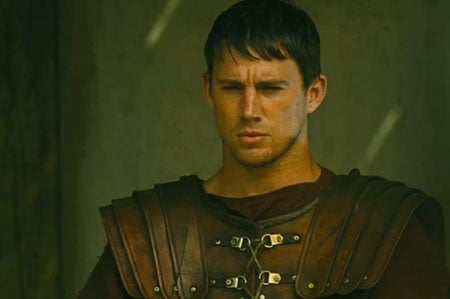 Channing Tatum does his best Russel Crowe in "The Eagle"

YOUR FEATURE PRESENTATION
THE EAGLE is the latest of the many sword & sandal ripples that Gladiator set in motion 11 years ago. Channing Tatum is this year's brave soul, stepping into the Arena of Undefeated Russell Crowe Memories. Channing plays Marcus Aquila, a young centurion getting his first command in Britain. His faither soiled the family name by vanishing in the North of Britain and losing his legion's gold standard, The Eagle. Though Rome at large has moved on, Marcus is obsessed with retreiving the shiny bird.

Marcus is very serious about his command but he's also good at it. In fact, he's practically clairvoyant in his first test as a leader, sensing danger coming well before it arrives. Though he saves his men, a serious injury sidelines him from battle, and the film threatens to stop dead in its tracks just as its begun. Thankfully the movie picks up considerably when Jamie Bell enters as Esca. 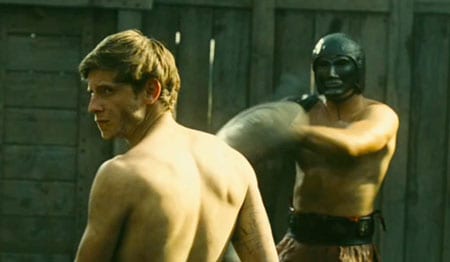 Lower your hands. Jamie already got the job.

One has to wonder when Hollywood will stop casting Jamie Bell as the sidekick. It's not a matter of scene-stealing so much as a screen presence that's too big to hide. He only needs another Billy Elliot (2000) sized role to convince Hollywood of what is plainly obvious to moviegoers with working eyeballs: he's a star. In that dumb would-be franchise Jumper, Hayden Christensen stopped existing entirely once Bell was in frame. Channing Tatum fares quite a lot better but then, he's not a bad actor, just one with a small range.

I'd love to report that Tatum and Bell's epic game of Master & Servant, with the tables turned dramatically on more than one story occassion, was hilariously homo-erotic but though they have solid chemistry, the movie is more interested in their honor codes than their bodies despite the sometimes fleshy genre they're starring in.

On the bright side, the film's flaws are interesting. The casting is strange. One wonders what they were going for. Tatum and Bell both seem to be in the same movie but other key figures are not. Ubiquitous out gay character actor Denis O'Hare (True Blood) doesn't even bother with the time period (140 A.D if you're wondering). He's so 2011 you half expect him to whip out a laptop to school Channing on the fort's budgetary restrictions. Tahar Rahim, the sensational French star of A Prophet, is compelling as Marcus's nemesis, the Painted Warrior, but he's in a more otherworldly movie. Though the narrative is mainstream to the core with traditional masculine anxiety issues as dramatic bullet points (honor, daddy, the family name, cowardice vs bravery), The Eagle also fancies itself to be a lyrical Terrence Malick-like epic with hypnotic shots of nature forcing their way in repeatedly. Incidentally, that's the same weird movie that Tahar Rahim is starring in. When Channing and Jamie drop by to pay him a visit, the film hits its peak.

ALSO OPENING: Adam Sandler and Jennifer Aniston play fake husband and wife in JUST GO WITH IT; Justin Bieber gets his own 3D movie NEVER SAY NEVER GOING TO SEE THIS; If you're into fashion/culture time capsules the documentary VIDAL SASSON THE MOVIE has a few super moments but otherwise it's a hagiography; POETRY is an amazing South Korean film about an old woman rocked by a young girl's murder; Ed Helms stars in the comedy CEDAR RAPIDS with Sigourney Weaver and Anne Heche; and Shakespeare rolls over in grave for the animated film GNOMEO & JULIET.