Writes Dozier: "The Navy has admitted that it was wrong when it accused dog handler Michael Toussaint of vicious hazing that singled out a gay sailor under his command at kennels in Bahrain."

Read all our background on Rocha's story HERE. 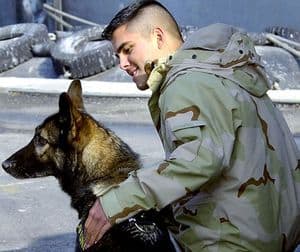 To the contrary, the Navy has concluded that the evidence, including testimony from multiple members of my unit, shows that Toussaint is guilty of creating a highly intimidating climate of fear that involved systematic abuse. This is why, of course, it is forcing him to retire…

Rocha points out five factual errors in the AP story and adds, "Toussaint's new letter of censure from the Navy reads: 'As the leading chief petty officer, you set a poor example by engaging in conduct that clearly violates the Navy's prohibitions against hazing and fraternization… As a result of your poor example, your subordinates emulated this behavior by taking part in their own hazing activities…'"

Finally, Rocha says, "The AP story called my integrity into question, but I was not given a chance to respond to its numerous, incorrect claims. AP released a brief version of its story titled "Navy admits wrong call on accusing dog handler" without even contacting me…The bottom line is this. My commander created a climate of fear in my unit which included a pattern of abuse, much of it directed at me. I did not complain about any of this, but an investigation was launched nonetheless when another unit member notified authorities. Multiple members of my unit testified about the abuse during the investigation. Although there were flaws in that investigation, there was more than enough evidence for the Navy to censure my commander for hazing, to force him to retire and to state, officially, that he does not meet the standards expected of a leader. The U.S. Navy did the right thing in this case. AP did not."