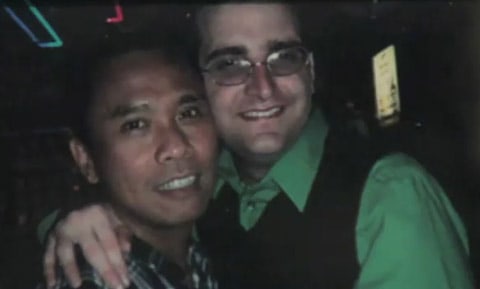 Philadelphia couple Anton Tanumihardja and his partner, Brian Andersen, were set to be split apart today despite Anton's continuing pleas for asylum.

Anton would seem to have a compelling case for asylum.  Anton is gay, which doesn't go over well in Indonesia.  The gay community there is forced underground.  Anton recounts a time some of his friends were at a secretly planned gay party, which was raided by Muslim extremists.  The partygoers fled, and some were seriously injured.  He was almost at that party, but the ever-industrious Anton didn't want to miss work.

"They attacked inside the building where all the gay people were just having a meeting, and then everybody had to run to save their life," he recalls.  "My friend had to stay in the hospital because he tried to jump through the fence and scratched his arm."

If being gay weren't enough, Anton is also ethnically Chinese and Catholic.  All three make him a minority and potential target of violence in Indonesia.

Lavi Soloway of Stop the Deportations writes to tell us that Anton's deportation has been granted a last minute stay:

"Therefore ICE will extend the Stay .. until a decision is made by the BIA [Board of Immigration Appeals] on his Motion to Reopen."

Watch an interview with Anton and Brian, AFTER THE JUMP…