George Washington University law professor and noted scholar of constitutional law Jonathan Turley talks to Salon about the DOMA news, and about the politics of making the announcement now: "These cases are coming up for appellate decision. So the cases themselves force this issue. The assumption is that the administration was waiting until after the midterm elections to take this position. Everyone that I've spoken to believes this decision was motivated by political considerations and not legal considerations. Eric Holder has proven an extremely political attorney general, much in the same way as the Bush attorneys general. His position not to prosecute torture, his decision to defend DOMA, and his prior decisions on DOMA were all driven by political considerations in the view of his critics. So I think that's what the motivation is." 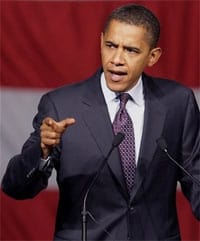 Equality Matters expose the blatant falsehoods spread by FOX News anchor Megyn Kelly, and boy, are there are a lot of them.

Equality Matters has an extensive page of right-wing reactions to the DOMA news.

And Kerry Eleveld has a big piece up as well.

Mike Huckabee rips Obama on DOMA, implies link between same-sex marriage and broken homes. "I do know there is a definite economic impact of the breakup of families in this country."

Rick Santorum called the DOMA news part of Obama's "effort to erode" America: "When the definition of marriage has been put before the people, they have time and time again – from Maine to California – stood up in defense of the traditional family. President Obama's refusal to defend a law that was overwhelmingly supported on both sides of the aisle and signed into law by a president of his own party is an affront to the will of the people. This is yet another example of our president's effort to erode the very traditions that have made our country the greatest nation on earth, and it begs the question what language changed in the constitution since 2008 to reverse his position?"

Could the Attorney General's letter and Obama's remarks regarding "heightened scrutiny" affect the Log Cabin Republican case against 'DADT' as early as tomorrow?

In a press briefing today, White House Press Secretary Jay Carney reiterated the President's support for repeal of DOMA: "The president has long believed that DOMA — the Defense of Marriage Act — is an unnecessary and unfair law. He support repeal of the law. As for its constitutionality, obviously he made clear his views on that in the decision he made that was announced yesterday. But he does support the repeal, yes."