Senator Jim Webb (D-VA) will not seek reelection, he said in a a statement today: 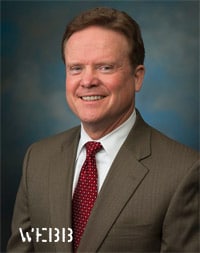 "After much thought and consideration I have decided to return to the private sector, where I have spent most of my professional life, and will not seek re-election in 2012."

Writes Chris Cillizza at the WaPo:

Webb's announcement, which came this morning in the form of a statement from his office, was not terribly surprising to Democratic observers who had long believed that the Senator was a toss up — at best — to run for a second term.

Regardless, Webb is the third Democratic (or Democratic-affiliated) Senator to call it quits already this year, joining Sens. Joe Lieberman (I-Conn.) and Kent Conrad (N.D.) on the sidelines. Texas Sen. Kay Bailey Hutchison is the lone Republican to announce she will not seek re-election in 2012.

While holding the Connecticut seat should pose limited problems — if any — for Democrats, both Virginia and North Dakota have deep Republican roots and will be major targets for Republicans in 2012.