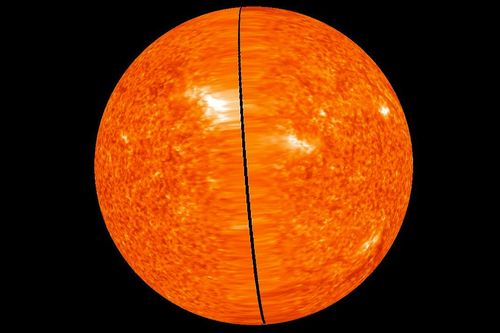 Discover magazine explains: "In October 2006, NASA launched a pair of twin spacecraft into space. Called STEREO — Solar TErrestrial RElations Observatory — they traveled in opposite directions, one ahead and the other behind the Earth in its orbit around the Sun. The goal was to get a wide, stereoscopic view of the Sun which would provide 3D information on our star."

"This image taken just four days ago, is the result: the far side of the Sun! If you could bore straight through the center of the Sun in this image, plunging through nearly 1.4 million kilometers of solar fire, out the other side, and straight on for another 150 million kilometers, you’d be back at the Earth."

Watch a NASA video of how (and why) the photo was taken in space, including a 360 degree animation of the 3-D image, AFTER THE JUMP.