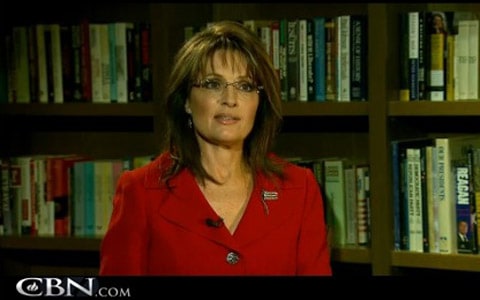 Sarah Palin explains why she isn't attending the CPAC conference and comments on the conservative boycott of the conference over the participation of gay group GOProud (without mentioning them specifically), in an interview with David Brody at the Christian Broadcasting Network.

"Well, I’ve never attended a CPAC conference ever so I was a little taken aback this go around when I couldn’t make it to this one either and then there was a speculation well I either agree or disagree with some of the groups or issues that CPAC is discussing. It really is a matter of time for me."

Palin suggests that boycotts, such as the one targeted at CPAC by conservatives unhappy with the attendance of gay group GOProud, serve to stifle debate and balance:

"But when it comes to and David, perhaps what it is that you’re suggesting in the question is should the GOP, should conservatives not reach out to others, not participate in events or forums that perhaps arising within those forums are issues that maybe we don’t personally agree with? And I say no. It’s like you being on a panel shoot, with a bunch of the liberal folks whom you have been on and you provide good information and balance, and you allow for healthy debate, which is needed in order for people to gather information and make up their own minds about issues. I look at participation in an event like CPAC or any other event along kind of in that same vein as the more information that people have the better."

Previous Post: « Did Christina Aguilera Really Need to Apologize for Flubbing a Line in the National Anthem?
Next Post: Who Will Control the .GAY Domain? »