Americablog reports that an attorney in Edie Windsor's challenge to DOMA in the state of New York received a copy of an order given to House Speaker John Boehner giving Congress until April 18 to intervene in that case. 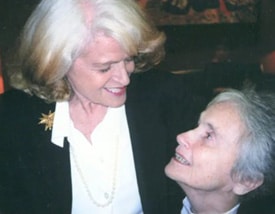 ORDER that: 1) Congress, should it wish to intervene in this matter, shall do so by April 18, 2011 by motion pursuant to Fed. R. Civ. Pro. 24(a), consistent with 28 U.S.C. §530D; and 2) Counsel for the plaintiff, the Department of Justice, and any Congressional intervenor shall appear on May 9, 2011 at 9:30 am for a conference with the Court to discuss how this case should proceed in light of the President's decision, as announced by the Attorney General on February 23, 2011, that Section 3 of the Defense of Marriage Act ("DOMA"), 1 U.S.C. § 7 as applied to same-sex couples who are legally married under state law, violates the equal protection component of the Fifth Amendment. SO ORDERED. (Status Conference set for 5/9/2011 at 09:30 AM before Magistrate Judge James C. Francis) (Signed by Magistrate Judge James C. Francis on 3/15/2011) (lnl)

Watch a great clip on Edie Windsor's case, AFTER THE JUMP…

A press conference is scheduled for today at which legislation to repeal DOMA will be re-introduced. Windsor will be present.

Boehner recently announced that the House would defend DOMA in court.