Well, isn't this disgusting? Orange County's Crystal Cathedral has asked the members of its choir to sign a "covenant" asking them to respect the Biblical view of sexual intimacy and marriage, between one man and one woman, the Orange County Register reports: 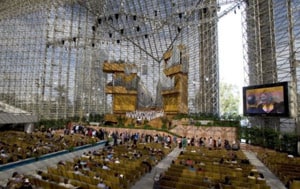 The "Crystal Cathedral Worship Choir and Worship Team Covenant," recently handed out to members, states that members should commit to being Christians by following the Bible in every way.

Former and current choir members say they are particularly offended by a statement in the document that refers to homosexuality. Long-time church members say this is the first time they have seen the cathedral take a firm stand against homosexuality and are disturbed by it.

The covenant states: "I understand that in an era where images of family relationship and personal sexuality are often confused, Crystal Cathedral Ministries believes that it is important to teach and model the biblical view. I understand that Crystal Cathedral Ministries teaches that sexual intimacy is intended by God to only be within the bonds of marriage, between one man and one woman."

Some choir members are furious.

"If I were still in the choir and if that was presented to me, and if a gay person had walked out, I would have walked out with him or her," she said. "If you are a Christian group and people come to you, you should be a good servant, love them and shine the light of Jesus on them – regardless of who they are."

A cathedral spokesman said that the pact doesn't mean gays are banned from the choir, they are just "strongly encouraged" to sign something that says who they are and what they do is wrong.