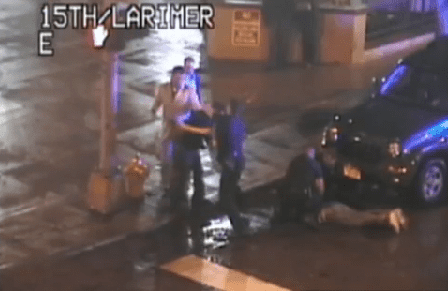 Two Denver police officers were fired from their jobs yesterday, two years after an incident that led to the arrest of a gay man who had used the women's room at a local club. Police used excessive force to arrest the man's partner, Michael DeHerrera, who, at the time, was simply placing a cell phone call to his father. The two officers were found to have lied about the incident after surveillance video surfaced soon afterward that showed a different version of events than they had filed in their police reports.

In announcing the firings, Denver's Manager of Safety Charles Garcia said the actions of officers Devin Sparks and Randy Murr, did "immeasurable harm" to the department. "We are entrusted with the public's confidence and that requires incorruptible character, fair treatment of all people and truthfulness in all of our officers," Garcia said. Garcia is the civilian authority who oversees Denver's police and fire departments and sheriff's office.

Sparks was fired for "inappropriate use of force" and lying in his police report. Murr was fired for falsifying his report on the altercation. The flap stemmed from an April 2009 incident when Michael DeHerrera and his partner, Shawn Johnson, were detained by police after Johnson was ejected from a bar in lower downtown Denver.

Murr and Sparks said in their police reports that the men were belligerent, and force was required to subdue them. But a city surveillance camera showed DeHerrera talking on a cell phone when Sparks suddenly hurled him to the ground and pummeled the prone man with a sap, a metal rod wrapped in leather.

There has been speculation that the two men were targeted by the officers because they are gay.

Watch a news report of the incident, including the street surveillance video in which the claims of the officers are completely debunked, AFTER THE JUMP.