Earlier this week, Victoria Jackson appeared on CNN defending her anti-gay statements about that now much talked about gay kiss on Glee. The former Saturday Night Live cast member continues to rage against against homosexuality in her most recent column in World Net Daily. Jackson rambles on about how she believes the employees and on air talent at CNN are "pod people" and talks about having gay friends who she doesn't seem to believe are really gay (she even writes the word in quotes): 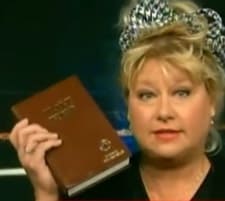 "Driving to the Atlanta airport, I thought about G, my lifelong college friend from Auburn. He drove with me cross country in my 1980 beat-up Toyota Starlet when I went to Hollywood to be an actress. He was the only person who believed in me. He knows all of my sins. I know a few of his. I always tell him I don't believe he is 'gay' – we went on a date once and even kissed. We wrote a screenplay together. He loves drama. I can picture him now laughing, 'Victoria, what are you doing?! Your career! You'll never work again in Hollywood! Oh, but Hollywood loves a scandal!' And, then the twinkle in his eye. I can see my best friend A, who I also tell is not 'gay,' saying in his British accent, 'Victoria, my shiny, shiny friend! I still love you!' and then the big hug!"

Her take on gay roles in Hollywood:

"Actors play murderers, robbers and gossips, but the gay lifestyle is always glorified. The other sins always seem to be punished or redeemed, but TV shows never show the downside to homosexuality: the loneliness, shame, broken families and marriages, diseases. The shame does not come from 'society' but from God. So, even if the gays get everyone in the world to accept their behavior as "normal," there will still be shame, because it goes against God. Unless sin numbs their soul and their heart turns to stone, they will hear the still, small voice of God saying, 'I have a better way.' I was asked to do a lesbian kiss in a show once, and I said no. But, I'm guilty of being part of a few movies that may have been a bad influence on young people. I'm very sorry to anyone I led away from God."

Watch Annie Solstad of NYC's 3rd wheel comedy troupe do a Saturday Night Live-worthy impersonation of an anti-Little Mermaid Jackson, AFTER THE JUMP.