This Tuesday, anti-gay bigots plan a rally against same-sex marriage at the Iowa Capitol. They'll have some special guests, the Des Moines Register reports: 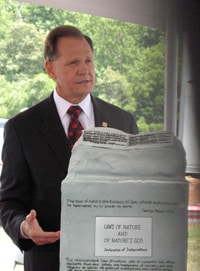 The marriage rally is set for 11:30 a.m. on the west steps of the building, according to Bob Vander Plaats of the Family Leader, a social conservative advocacy group.

One guest will be Roy Moore, the chief justice of the Alabama Supreme Court who defied an order from a federal judge to remove a monument of the Ten Commandments from the inside the state’s judicial building. Alabama’s court of the judiciary unanimously removed Moore in 2003 for placing himself above the law.

Other guests at the rally are the Rev. Keith Ratliff, pastor at Maple Street Missionary Baptist Church in Des Moines, and the Rev. Cary Gordon, a Sioux City pastor who urged Iowa voters to oust the three justices who were up for a retention last fall.

The NYT profiled  Vander Plaats in a story published today.