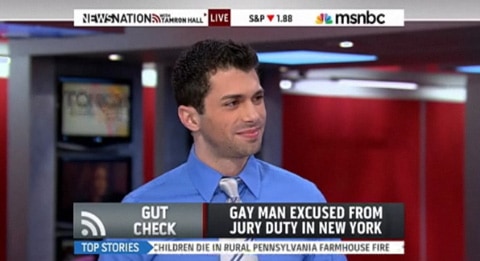 Jonathan Lovitz, a gay New Yorker, was excused from jury duty earlier this week. The reason for his dismissal is getting quite a bit of attention.

Here's what he told the judge: Since I can't get married or adopt a child in the state of New York, I can't possibly be an impartial judge of a citizen when I am considered a second class one in the eyes of this justice system."

The judge agree. Lovitz appeared on MSNBC on Wednesday, where he discussed the jury duty incident, and was also given a nice plug for his upcoming LOGO reality show, Set-Up Squad.