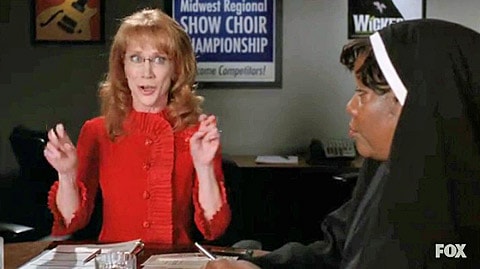 Griffin drew on Sarah Palin and Christine O'Donnell in her depiction.

Said Griffin's character, who reveals that she lost her last election and "twittered" that "Obama is a terrorist": "Before we begin, I would just like to say, I am not a witch."

When the judges discuss Kurt and Blaine's duet, Griffin's character snips: "Well, boys shouldn't do a duet. The last thing we need to do is send a message to children that 'gay is okay.' It is not a legitimate lifestyle, and last time I checked, it's not in the Constitution."