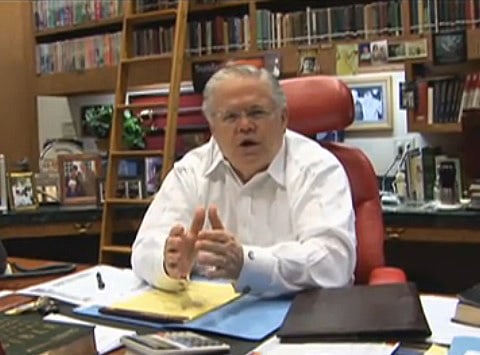 Right Wing Watch points us to a new YouTube channel started by Pastor John Hagee, the pastor John McCain was forced to cut ties with during the 2008 election.

Hagee, you may recall, gave a sermon in 1990 that says Hitler acted on God's behalf in "hunting" the Jews so that they might establish Israel, and has made disparaging remarks about Catholics (for which he apologized) and has also said that gay sin was responsible for Hurricane Katrina.

So the content of one of his first clips really comes as no surprise; that the repeal of DOMA will lead to polygamy.

Another video from Hagee warns that "political correctness" is preventing the U.S. from the necessity of profiling Muslims.