An odd encounter at South By Southwest yesterday between Jake Gyllenhaal, a urinal bank and a guy who had his camera aimed at the actor's crotch: 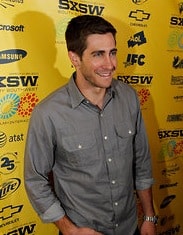 The world premiere of Duncan Jones’ “Source Code,” which kicked off this years’ South By Southwest film portion on Friday night, is being overshadowed by a strange story involving Jake Gyllenhaal, a camera, and a men’s room.

Twitter exploded with accounts of a scuffle between Gyllenhaal, who plays a soldier in Jones’ sci-fi thriller, and a guy who tried to take his photograph … er, mid-stream.

“Gyllenhaal apparently grabbed the dude mid-photo, threw him against the wall and was like, ‘are we really gonna do this right now?’” Tweeted Cinematical’s Erik Davis.

And JoBlo, who reportedly was in the men’s room when the “fight” occurred, updated, “Guy just tried to take Jake Gyllenhaal’s picture while he was taking a leak. Cops came. Brouhaha ensued.”

Guess these photos weren't enough for him.

UPDATE: Gyllenhaal confirmed the report to EW — "That’s true. I think it’s an appropriate space to keep privacy. I hope that people wouldn’t disagree with me on that."