Andre Cooley, a corrections officer in Mississippi's Forrest County, who was fired after supervisors discovered he is gay, will be reinstated as part of a settlement in a lawsuit brought by the ACLU last October, the Hattiesburg American reports: 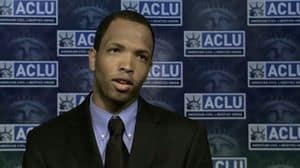 “We are happy to have Mr. Cooley return to work in the department. His sexual orientation has no bearing on his ability to perform the duties of a corrections officer,” said Sheriff Billy McGee. “The Forrest County Sheriff’s Department is an equal opportunity employer, and we do not discriminate based on sexual orientation. Our new written policy will make this position clear to every employee in our department.”

The settlement includes a monetary element as well, which has not been disclosed.

Watch an ACLU interview with Cooley conducted last October, AFTER THE JUMP…

Previous Post: « Actor Farley Granger, Who Refused to Play Hollywood ‘Marrying Game’, Has Died at 85
Next Post: Watch: A Lesson on Taking the Bible at its Word »