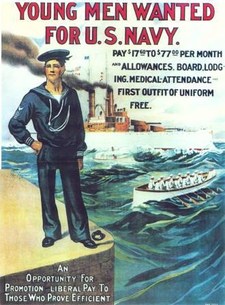 Navy officials have launched discharge proceedings against a Petty Office, Stephen C. Jones, after he and another sailor were found in bed together.

Though Jones insists he and his friend simply fell asleep while The Vampire Diaries, investigators claim their unintentional sleepover crossed "professional lines."

The investigative summary and charging documents do not specify how Jones's actions constituted unprofessional conduct. Jones said his friend often stopped by his room to watch videos, and noted that visiting hours lasted until 2 a.m. that Saturday night. He and his attorney said they have repeatedly asked the Navy for clarification.

[Thomas] Dougan, the Navy spokesman, acknowledged that no regulation specifically prohibits sailors from falling asleep in the same bed. But he said rules do require them to "behave professionally in the barracks" and that Bailey, the commanding officer, concluded that Jones and McGee had not done so. "The determination was that two sailors sharing the same rack was unprofessional."

Read more about this case, AFTER THE JUMP…

The case has nothing to do with Don't Ask, Don't Tell — neither of the men, stationed at Charleston, South Carolina's Naval Nuclear Power Training Command, has been accused of being gay — but does highlight how certain officials may be able to get around the law's forthcoming repeal.

Said Alexander Nicholson, executive director of gay group Servicemembers United, "It's been the case for years that commanders had at their disposal the means to chapter someone out of the military for something other than homosexual conduct… If you want to get rid of somebody, you can always find something to punish them for."

What's more, the charges also show how panicky people can get over male bonding: Jones' roommate told officials both men were in their boxer shorts when he walked in, a detail that raises the specter of homosexuality, but doesn't necessarily equal homosexuality.

Contrary to popular belief, many men, like many women, often get undressed in front of one another and have no qualms palling around in their undergarments. That's a completely human inclination, and not one that should immediately be associated with sexuality of any nature. If you ask me, the fact that such male bonding raised so many eyebrows suggests that Navy officials aren't as mature as they would like us to believe.

For the record, Jones' friend, Brian McGee, has accepted a lesser charge to remain in the Navy.
﻿