The San Diego Union-Tribune has received an early copy of the training program that all Navy personal will receive sometime over the next few months. The program, which will apparently run between 90 minutes to two hours and will include a 24-minute slide show, uses several "real life" examples (they don't hold back much) of how one should appropriately handle gay-related situations.

The Union-Tribune reports one two of those examples: 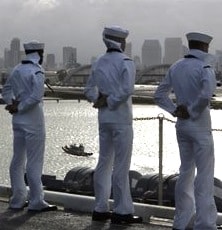 An example: A sailor dressed in civilian clothes is marching in a gay-rights parade. She is holding a sign that says “support gays and lesbians in the military.” Is that sailor breaking the rules? The Navy’s answer, according to a handout, is a qualified no.

Just like marching in a political rally, a military person is not allowed to do so during work hours or in uniform. Dressed as a civilian and on her own time, despite the sign, a gay-rights parade would be “within the sailor’s right of expression and consistent with good order and discipline.”

Another example: In a locker room, two sailors are making loud derogatory jokes about not wanting to shower in front of a gay sailor. What does a leader do? The Navy’s answer is that a leader should inform the two sailors that discrimination and harassment aren’t appropriate.

However, if someone requests the ability to avoid showering with another person, commanders will “have the discretion to grant personal requests within unit policies if the mission is not unacceptably impacted,” according to the material.