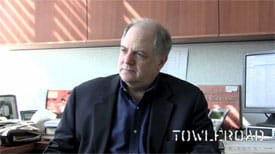 Rich will be an essayist for the magazine, writing monthly on politics and culture, and will serve as an editor-at-large, editing a special monthly section anchored by his essay. He will also be a commentator on nymag.com, engaging in regular dialogues on the news of the week.

“Frank Rich is a giant — a powerhouse critic of politics and culture, a rigorous thinker, a glorious stylist, a skeptic and optimist at the same time. There is just no one like him in American journalism,” said New York editor-in-chief Adam Moss. “He is also a friend. I have had the privilege to work with him for almost 25 years. Since the day I came to New York, I have hoped I could persuade him to join us here. I'm ecstatic that he will now be bringing his wisdom to our growing audience. This is a very big day for New York.”