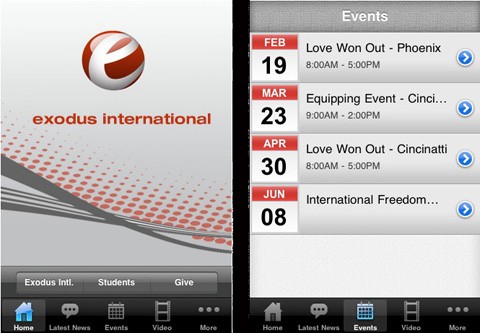 Last week, I posted about an iPhone app from "ex-gay" ministry Exodus International available for download in Apple's app store. Since news began breaking about the app, and its promotion of harmful "ex-gay" conversion therapy, a Change.org petition has received (at this posting) 92,314 signatures.

Apple has yet to respond to calls for its removal.

Meanwhile, Dr. Gary Remafedi, a scientist whose work is cited in the app, has written a letter to Apple demanding the app be removed, Truth Wins Out reports:

When one clicks the Exodus app, it directs the viewer to a webpage that answers questions about homosexuality. One of the question sequences is, “If people are same-sex attracted but don’t ever act on it, does that make them homosexual? What if they do engage in same-sex physical intimacy? Are they homosexual then?”

In answering these questions, Exodus twists the findings of Dr. Remafedi to make it appear as if homosexuality is just a transitory phase in youth.