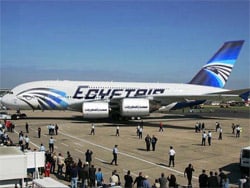 Officials noticed a 22-year-old passenger of "outstanding beauty" embarking from a plane coming from the Jordanian capital Amman, holding a passport under the name Ahmed. The passenger said she had undergone a gender reassignment operation and become a female six weeks ago, but hadn’t yet been able to modify her passport data.

Arriving on the same plane, a 19-year-old male passenger held a passport with the female name Israa. He said he had undergone surgery to became male, but also wasn’t able to update his passport.

The passengers were then examined, and their accounts proved to be correct. However, customs authorities banned them from entering Egypt and put them on the same plane back to Jordan.