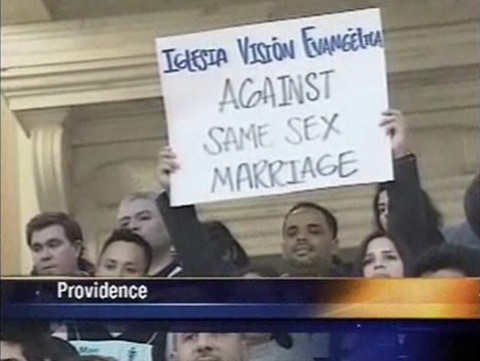 It was standing room only in Providence Rhode Island last night, as the Senate Judiciary Committee held hearings on a marriage equality bill.

Chairs in the Senate committee room filled up hours early. Opponents and supporters lined hallways outside with capitol police officers standing by. Opponents of gay marriage standing outside had to be quieted after loudly chanting "one man, one woman."

"Marriage between one man and one woman is more sacred than anything," said Roy Gustafson, a Warwick auto body technician who took time off work to protest the legislation. "We're being bullied into this by states like Massachusetts. Rhode Island should stand up and say we're not going to do it."

And from the Providence Journal, the story of a cancer patient who testified last night: 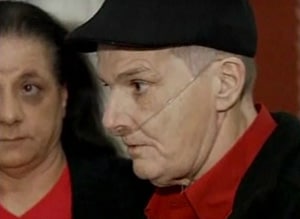 On Thursday night, accompanied by her wife, Deborah Tevyaw, whom she married in Massachusetts, Baker testified at a Senate hearing.

Baker, a 51-year-old correctional officer, was never a gay-rights activist. But after doctors diagnosed her with incurable lung cancer in December, she got an added jolt. The federal Defense of Marriage Act [currently under legal challenge] precludes Tevyaw from collecting the Social Security benefits Baker earned for a surviving spouse.

Legalizing same-sex marriage in Rhode Island will not change that for now.

Nonetheless, the discovery stunned Baker, leading her to embark on what may well be her first and last act of bravery in the name of marriage equality.

Watch a report on last night's Rhode Island hearings which includes an interview with Baker, AFTER THE JUMP…