The Twilight star sounds off on a variety of topics in a new EW cover story, among them the physical requirements demanded of a Hollywood leading vampire. 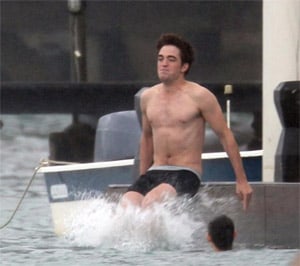 EW: And after you do press for Elephants you’re going straight into David Cronenburgs Cosmopolis?

Pattinson: Yes, I’m so excited, and I’m freaking out. I have no prep time, and it’s a Don DeLillo book with semi-obscure dialogue, and I have to change my body shape quite a bit. I’m playing one of those masters-of-the-universe types, and I have to have about 6 percent body fat… which means I need to lose about 70 percent. [Laughs]

EW: So its gym time.

Pattinson: If I could just cut out beer, that’s my one thing. At the beginning of [Breaking Dawn] I had to be really buff because I had to have my shirt off. And when I start [getting fit], I just go crazy about it. It’s like the only thing I can talk about to anyone. So I was like, “I’m going to keep this up the whole time, so for whatever movie I do afterwards I’m going to be so buff.” And then literally one day after my last shirt off scene I started being all [mimics eating voraciously] nom, nom, nom. And I didn’t realise I had one more [shirt off] scene, and you can see it in one of them- I’m clearly [exaggeratedly sucks in his stomach and cheeks].

Previous Post: « Dan Savage: ‘That’s Staggering to Think I am a Gay Man and I Give College Girls Orgasms.’
Next Post: Ugandan Parliament May Shelve ‘Kill the Gays’ Bill; Could Transfer Provisions to ‘Sexual Offenses’ Bill »