A senior at George Washington University has been charged with assault with significant bodily injury as a hate crime for attacking another student he perceived to be gay, student paper The Hatchet reports: 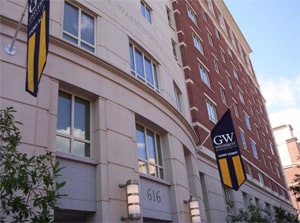 The victim was transported to GW Hospital with significant head trauma, including bleeding in his brain.

The incident is classified as a hate crime, or a crime directed at an individual based upon prejudice or bias, according to the documents. The victim – whose name is being withheld due to a Hatchet policy of not naming assault victims – said he never met Richardson prior to the assault.

The victim doesn't remember what happened, but thankfully there were witnesses:

The victim fell to the ground and Richardson punched him and walked away, but returned and kicked him again, according to the documents.