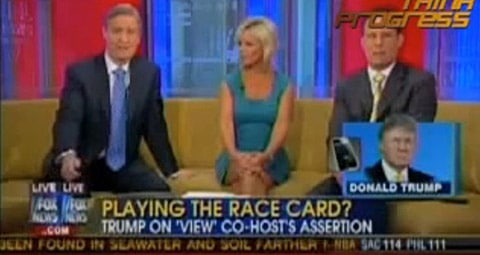 You can hear the spittle flying from Trump's mouth in his latest birther rant from this morning's FOX & Friends in which he calls for an investigation of Hawaii's governor over Obama's birth certificate.

Asks Steve Doocy: "What about the mainstream media accounts of this dust-up over the past week where they're trying to paint you as the mayor of crazytown for bringing this up?"

The myth that President Obama was born anywhere else than where he says he was has been roundly and repeatedly debunked, so one must ignore entire swathes of reality to continue to believe it. For example, Trump wants Obama to present a Certificate of Live Birth, but here it is, widely available on the internet, as it has been for nearly three years.

Previous Post: « Man Beaten in Anti-Gay Assault in NYC’s West Village
Next Post: Matt Damon: When I Kiss Michael Douglas I am Making Out with Catherine Zeta-Jones »