Former Louisiana Governor and presidential hopeful Buddy Roemer, who has one gay relative who fled the state to feel comfortable, thinks it's fine for states to legalize marriage, but he wouldn't do it: 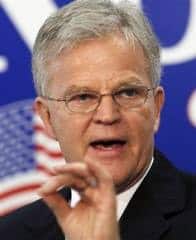 “I’m a traditionalist in marriage,” Roemer, a self-described “southern Methodist boy,” said. “Here’s as far as I can go: I’m comfortable with the states having this discussion. And I’m all for — in my extended family, not my wife or kids, but beyond — cousins, that sort of thing — we have a gay member. We honor him. He’s a great guy. He moved to California so he would be in a community where he would be more comfortable. And I love living in a country where gays are honored and esteemed, but traditional lives can continue as well.”

So if a state voted to legalize gay marriage or a form of civil unions, you’d be fine with that?

“That’s right,”said Roemer, who has been divorced twice. “[If] I was living in the state or was part of the debate, I would oppose it, I want to make that clear. But that’s why we have 50 states. They’re all a little bit different.”