Last night the UN voted to take action against Libya: 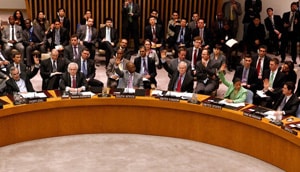 Diplomats said the resolution — which passed with 10 votes, including the United States, and abstentions from Russia, China, Germany, Brazil and India — was written in sweeping terms to allow for a wide range of actions, including strikes on air-defense systems and missile attacks from ships. Military activity could get under way within a matter of hours, they said.

Only hours after the United Nations Security Council voted to authorize military action, including airstrikes against Libyan tanks and heavy artillery and impose a no-flight zone to try to avert a rout of rebels by forces loyal to Col. Muammar el-Qaddafi. French officials said e on Friday that military action would start “within a few hours” and news reports said British and French warplanes would spearhead the attack.

Celebration immediately rang out in the rebel city of Benghazi:

With the government’s forces closing in, the rebels had begged for military protection. Their pleas were only answered after a change of heart by the Barack Obama administration, which had opposed a no-fly zone for weeks but agreed to support the British and French initiative as opposition towns fell rapidly to the Libyan leader.

The decision at the UN appeared to have an immediate impact on Col Gaddafi’s thinking. Saif al-Islam, one of his sons, said there had been a change of tactics and that as a “humanitarian gesture” the Libyan army no longer intended to march on Benghazi, the rebels’ last major stronghold.

Watch the Telegraph's report, AFTER THE JUMP…

The Guardian has a live blog going….