The Wall Street Journal has published a review of Joseph Lelyveld's new book about Mohandas Gandhi titled, Great Soul. From the review: 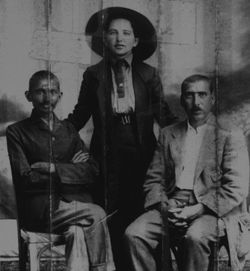 "Yet as Mr. Lelyveld makes abundantly clear, Gandhi's organ probably only rarely became aroused with his naked young ladies, because the love of his life was a German-Jewish architect and bodybuilder, Hermann Kallenbach, for whom Gandhi left his wife in 1908. 'Your portrait (the only one) stands on my mantelpiece in my bedroom,' he wrote to Kallenbach. 'The mantelpiece is opposite to the bed.' For some reason, cotton wool and Vaseline were 'a constant reminder' of Kallenbach, which Mr. Lelyveld believes might relate to the enemas Gandhi gave himself, although there could be other, less generous, explanations."

"Gandhi wrote to Kallenbach about 'how completely you have taken possession of my body. This is slavery with a vengeance.' Gandhi nicknamed himself 'Upper House' and Kallenbach 'Lower House,' and he made Lower House promise not to 'look lustfully upon any woman.' The two then pledged 'more love, and yet more love . . . such love as they hope the world has not yet seen.'"

"They were parted when Gandhi returned to India in 1914, since the German national could not get permission to travel to India during wartime—though Gandhi never gave up the dream of having him back, writing him in 1933 that 'you are always before my mind's eye.' Later, on his ashram, where even married 'inmates' had to swear celibacy, Gandhi said: 'I cannot imagine a thing as ugly as the intercourse of men and women."

In the above photograph, taken in 1913, Gandhi is to the left and Kallenbach to the right. Gandhi's secrerary, Sonia Schlesin, is in the center.