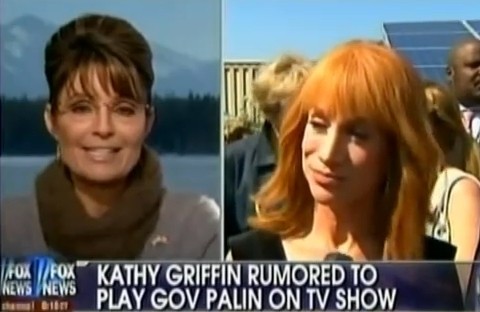 Clearly Palin’s not too pleased about the casting, or Griffin, whom she calls a “50-year old bully” and a “has-been.”

You know, Kathy Griffin can do anything to me or say anything about me, because you know, she’s kind of this – she’s a 50-year-old adult bully is really what she is…

She’s kind of a has-been comedian and she can do those things to me. I would just ask for respect of my children. As she had stated on CNN that her New Year’s resolution was to destroy my 16-year-old daughter, that takes it a little too far.

If Griffin were indeed to fly up to Alaska, and the two women came to blows, my money would be on Mama Grizzly Palin. Something tells me she knows how to handle herself in such a situation.

Watch Palin throw down the gauntlet, AFTER THE JUMP…